Dennis Joele is working for TriOpSys as test designer and has, as such, set up and performed different tests for de Royal Navy Hydrographic Service (Dutch: Dienst der Hydrografie van de Koninklijke Marine), based upon structured testing. In this article, he will describe a practical example in which Exploratory Testing was selected. Since both manners have been used within the same project, it is possible to draw a comparison. The results of this comparison led to a customer asking: ‘Why is this not a customary process?’ This question will also be answered.

Usually, we use structured testing. When using structured testing, a couple of conditions have to be met. An adequate documented test-base and sufficient preparation time for the specification of the tests have to be available. If one of these conditions is not met, a different test technique is available. This technique is known as Exploratory Testing.

The technique behind Exploratory Testing

According to one of the founders of the technology, Cem Kaner, Exploratory Testing can be defined as: ‘Any sort of test in which the tester prepares the test design during the test, and the information that is obtained during testing is used to test new and improved test cases’.

This implies that a number of steps have to be performed: a part of the system has to be explored (exploring), a consideration of what should be tested has to be made (test design) and the intended test has to be performed (test execution).

There are a couple of disadvantages: the repeatability of the test may be difficult, the chosen test technique during the test design is not visible, there is no test coverage and the direction of the testing is not known in advance. To resolve these issues, James Bach has upgraded the technique with a number of elements, which has resulted in ‘session based Exploratory Testing’: a test charter, a session, notes and a debriefing.

A test charter describes the tasks and goals that have to be implemented, as shown below:

A session takes place within a certain period of time, for example 2 hours in which the system is tested using the predefined test charter. Such a session is often performed by two people, for example a tester and a domain expert. The tester ensures that the (implicit) testing techniques are used and the domain expert completes the test cases from his/her system and domain knowledge.

In certain circumstances, it is possible to use Exploratory Testing. Some of these circumstances are listed below:

For example, the technique may also be used to figure out quickly how a particular system works, to investigate the quality of a system quickly or to examine a specific result in more details.

When not to implement

If one of the aforementioned conditions I met, it does not automatically mean that Exploratory Testing may be applied directly. Of course, there are situations in which the technique may not be suitable, such as:

The project in which Exploratory Testing has been applied concerns the construction of a new civil and military production system for creating nautical charts on paper or electronically. The system consists of several components, which are partly purchased externally and partly developed internally. These components are integrated into one unit where Workflow Management is the overarching layer. This is to ensure the management of the execution of the business processes. In total, five business processes were automated successively. Structured tests had already been executed for the first business process.

Exploratory Testing may only be used if testers are available with sufficient knowledge. Usually, this would be enough. However, the hydrographic field is highly specialized, and the knowledge regarding the subject matter was limited. To solve this, an end user was involved in the test execution.

These two circumstances were the basic assumptions upon which was decided to use this technique.

In a time period of two hours, a total of 11 results have been found. A total of 52 findings were made prior to the Exploratory Testing of the relevant sub-system. These findings emerged during the Performance Functional Acceptance Test (FAT) and User Acceptance Test (UAT). Both tests took approximately two days; one person executed the FAT and three people were included for the UAT.

For the previous period, in which structural testing was used, a calculation can be made as well, although this may be less accurate. The Findings Frequency becomes 52 findings / 60 man hours = 0.87 findings / man hour. A factor of 0.75 is used to calculate the effectively spent time. In this calculation, the time required to compile the Software Test Description (STD) and the reviewing of this has not been included. If this is set on 2 Mondays, the Findings Frequency reduces to 0.68 findings / man-hour. 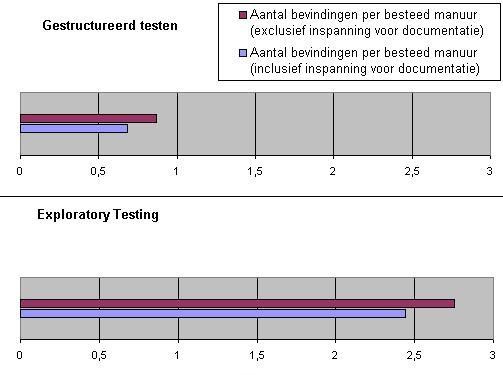 Dividing both Findings Frequencies results in a factor of 2.75/0.87=3.16 (excluding effort for documentation) and 2.44/0.68=3.59 (including effort for documentation). Exploratory Testing appears to be more effective than the previous tests. This can be stated because the deviations in both calculations should be greater than the factor, which is not likely. The second calculation shows the effect of the time required for the preparation of documentation clearly. This results in a higher decrease of the Effective Findings Frequency of Structured Testing than for Exploratory Testing.

This calculation only includes the number of findings, and not the origins of those findings. Of the results from the FAT and UAT, eight were classified as ‘Blocking’ or ‘Major’, versus three findings in the Ex[ploratory Testing session. This leads to the following Finding Frequency: 3 findings / 4.5 man-hour = 0.67 findings / man-hour and 8 findings / 76 man-hours = 0.11 findings / man-hour. However, it should be mentioned that two of the findings were caused by regression. If these are excluded from the calculation, Exploratory Testing is still twice as effective. Regardless, if both methods have to be equally effective, structured tests should yield more than 16.8 times as many results in this particular case. This is not very likely in this situation.

After reporting the results of the session, a simple but effective question arose from the direct stakeholders, the head of the Technology and Development Department. ‘Great e-mail, why aren’t we using Exploratory Testing normally?’.

Of course, Exploratory Testing may not be suitable in all situations. This may be the case when high-risk functionality has to be tested, or if standards require the demonstratiblity of the tests performed. However, if the conditions for Exploratory Testing are met, this can be a very effective manner of testing. 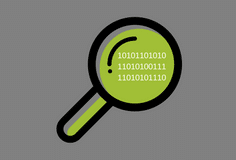