As a consultant and IPv6 evangelist, I regularly communicate with organizations regarding the necessity of introducing IPv6. The commonly heard motivation for not introducing IPv6 is that many at-home users do not utilize IPv6. However, research regarding myriad statistical IPv6 sites points in a different direction.

The first source is Google. Google is the largest search engine at this moment and is used by an immense group of internet users. Google is accessible through IPv6 and collects a considerable amount of statistics regarding IPv6. These statistics can be found at: https://www.google.com/intl/en/ipv6/statistics.html. The graph shown how many users connect with Google through IPv6.

There is something else to notice in the graph. It is not a straight line, but the line fluctuates rather constantly. On August 11 of this year, the usage approached 6.73%, on August 15, it increased to 8.26%, the 19th it decreased to 6.79% and on the 22th, it increased to 8.17%. The 11th and the 19th of August are respectively a Tuesday and a Wednesday. The 15th and 22nd of august are both Saturdays. If we turn back even further, we observe this pattern returning. There are more IPv6 users during the weekend than on a weekday.

Another website that is worth mentioning is the AMS-IX: https://ams-ix.net/technical/statistics/sflow-stats/ipv6-traffic. The first graph shows the daily internet use. Around 6:00 the use reaches the lowest point. From that moment on, a rapid increase is shown until approximately 12:00. Next, the usage levels off. After 16:00, an increase can be observed. If we inspect the graph below this one, the usage throughout the entire week is shown and an identical pattern can be noted per day. The third graph shows the usage for a whole month. This graph differs slightly from the one produced by Google. There is no increase in the usage of IPv6 shown during the weekend. It does show an increase in the usage of IPv6 in the evening hours. The last graph shows the usage during the entire year, but it lacks detail to inspect the daily structure properly. However, the increase in the usage of IPv6 at the end of July and the beginning of August is remarkable. We know that Ziggo and KPN are enrolling IPv6, which can be an explanation for this increase.

The premise that IPv6 is not yet used at home is not confirmed by the statistics. The statistics point in the direction of an increase in IPv6 usage within companies. The use of IPv6 at home will increase, especially now that companies such as Ziggo and KPN are enrolling IPv6.

The growth, as shown by Google, is an additional reason to start the launch of IPv6.

Martijn Bellaard has been working for TriOpSys as a lead architect for 3 years. At the beginning of 2017, he has pursued his life-long dream and has become a teacher at the Hogeschool van Utrecht. This article has been published on 03-09-2015. 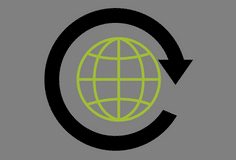